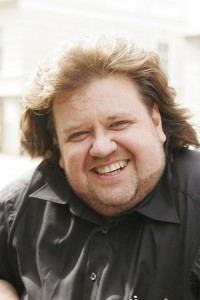 “Enraptured” is the word most often used to describe experiencing Wagner’s “Lohengrin” at Lyric Opera (through March 8), heard here for the first time in thirty-one years. Under retiring general director William Mason, the thinking was to generally alternate seasons between Wagner and Richard Strauss, the two most expensive composers to produce in an opera house because of the large size of the orchestras needed to perform them.

But last year, neither composer was performed, and since next year’s Richard Strauss’ “Ariadne auf Naxos,” only requires a chamber orchestra, couldn’t Wagner have been included next season as well? Grabbing a bite in his backstage dressing room at the Civic Opera House before a matinee of Puccini’s “La fanciulla del West,” Sir Andrew Davis titters with audible delight at the suggestion.

“You know I love these works deeply,” he says, “but they are very expensive to produce. Aside from the orchestra, there is the cast size and you cannot skimp on Wagner. How many great Lohengrins are there in the world today? One? Two? And imagine, the best one is sitting right there,” says Davis, pointing to South African tenor Johan Botha, who has entered the room.

“I can only sing ten to twelve Wagner performances a season,” admits Botha, “and this year, I am doing seven of them in Chicago. That means that the Met, Vienna, anywhere else in the world that wants you to sing Wagner has to wait because you can only sing in one place at a time.”

And yes, Botha admits, there is nothing worse than hearing singers not up to the task attempting to scale Wagner, the Mount Everest of the operatic world. “You hear them,” says Botha, “and your throat starts hurting after ten minutes.”

Further compounding matters is that the range needed for some Wagner works is not compatible with the range needed for other works. “Eighty percent of Wagner tenor writing is not high,” says Botha. “When you start doing ‘Tannhäuser’ [which Botha recently debuted at Covent Garden] and ‘Tristan’ [a role Botha is preparing but has not sung on stage yet], you cannot do ‘Lohengrin’ any longer nor the Italian repertoire that calls for you to have a high C like an Italian tenor.”

“We would love to have you do ‘Tannhäuser,’” Davis interrupts, conceding that it and “Meistersinger” are the only Wagner works that he has not done anywhere yet, and that, as such, “is a situation that will be rectified” and that we will hear him conduct those Wagner works at Lyric while he is music director.

The prospect of Botha doing “Tristan” has Davis intrigued: “We would love to be your first.” Botha is flattered but very clear when Davis leaves to conduct Act I of his matinee that the company that will get his first “Tristan”—or any significant new role, for that matter—will be “the first company, wherever it is, that has the right conductor, the right producer [Botha’s term for what Americans call director], the right cast and the right timing.”

“I was touched that when Mr. Mason came to hear me sing ‘Otello,’ ” says Botha, “that he came backstage and said, ‘We want you to do that here, and we will wait for you to come to do it, whenever you can.’” Such a production has yet to be announced, but Davis does hint at one point that “there will be major Verdi and Wagner undertakings in 2013” for the 200th anniversary of both composers. “And yes, at some point, we will have a brand-new, start-from-scratch ‘Ring.’ ” 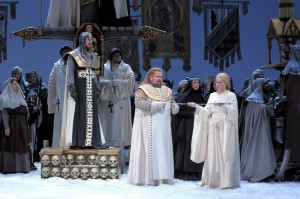 Botha is also so devoted to Wagner that he is already looking to a time in the not-too-distant future when Lohengrin will no longer be part of his repertoire. “My understudy Richard Crawley will be the next great Lohengrin,” says Botha, “no doubt. And so I work with him, my coach works with him. I want him to learn everything that he possibly can from me while I am still with this role: I am very interested in this young man taking up this role.”

Singing Lohengrin right now, however, is “a dream come true,” but Botha is quick to point out that there is an immense toll and a set regime for singing so taxing a role. “The next morning after every performance,” he says, “everyone thinks I am crazy, but I come in here and ask for a room, and I push the voice back upwards, but often, it does not want to go.” And yes, Botha has his vocal coach Brenda Rein with him wherever he performs.

“People are too afraid or too respectful to tell you what is happening with your voice,” says Botha, “so I need someone I can trust. The second performance when I am answering Elsa’s question [about who he is] I was too emotional, too powerful and I look over and see Brenda motioning me to scale back, be more linear and lyrical, and I think we finally got it overall, at least closer than opening night. You know, Lohengrin answers her question in front of everyone, but he is really talking only to her and musically, you need to get that across. Wagner is not about screaming and ranting, the way people often think of it: much of the music is actually quite tender and quiet and the colors are endless.”

The toll of being an international heldentenor is immense, and Botha shakes his head sadly as we address the fact that Ben Heppner just announced that he would be retiring his Wagner roles. “They are so hard,” Botha admits, “you sing for five hours and you have to sound like a god all night long. And so much of the music is so, you know, sexy, and just grabs you by the balls and won’t let go. You think of that first act of ‘Walküre,’ it is one long orgasm! My coach always says that Wagner must have been really great in bed to be able to write music like that.”

His own regime is to sleep in on show days, and make sure he has not eaten at least three hours before going on. “I come to the theater as the character,” says Botha, “but I leave as myself, though an invigorated self.” Yes, he remains “wide awake” and splurges on food after a performance, and yes, critics have chosen to make his weight an issue. “One critic in London said I was ‘lazy’ for sitting down during a scene in ‘Tannhäuser,’ but the producer asked me to sit down for that scene as part of the staging.”

Hearing Deborah Voigt, who went through weight-loss surgery, warming up for an entrance out in the hallway raises the obvious issue of the relationship between vocal heft and physique size: “You show me an anorexic tenor who can sing five hours of Wagner without fainting,” says Botha, “and I will be there.”