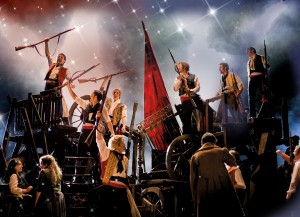 “That sure isn’t how I remember it, ” remarked one theatergoer, “but wow!” No, this is not your Mom and Dad’s “Les Miserables,” this is an incarnation completely rethought and reworked for its twenty-fifth anniversary. Many diehard “Les Miz” fans may end up missing aspects of the original, but others—myself included—will find it a vast improvement on the original production.

The fundamental flaw of the work used to be that if you come to “Les Miz” cold, even at more than three hours in length, you didn’t have the slightest clue as to what was going on. Characters came and went so quickly—in those days, literally with a circular turn of its massive set—and character development was so weak that the audience was given little chance to know the characters, let alone care what happens to them. But then, why would you try to skim over the entire epic Victor Hugo story in Reader’s Digest terms? Why not just tell one segment of the story, but in three-dimensional terms?

In a sense, that is what this new streamlined production attempts to do by fleshing out the narrative with a staging and production design with enough variance that it is able to highlight what is going on rather than the cavernous blackbox approach of the original which counted on a Robert Rauschenberg-like jigsaw puzzle of stuff that would come and go and transform into various shapes and patterns, including a battlefield barricade. When the pieces weren’t moving, the circular stage was, characters whisking in and out of scenes as if they were on a pillory, every turn representing a passage of time from the next day to decades later. Visually, the current production is quite Hugo-esque, the set designs based on his actual artwork. And via sophisticated computer graphics, these scenes quickly morph from one scene to another often to eye-popping effect.

Then there is not only the music itself, which has been skillfully streamlined for maximum effect, and sung not by “show” voices struggling with the demands of what has always been a very lyrical score, but with “trained” voices, indeed some that are downright operatic, which is really what “Les Miz” is: a through-composed work of constant music with little spoken dialogue. Everything is communicated through the music, but whereas the original production did this in 1980s Europop terms replete with synthesized textures that were cheesy back then, the music has been thoroughly re-orchestrated in the manner of nineteenth-century French grand opera, circa Meyerbeer. The combination of trained voices against a rich, orchestral texture works wonderfully well. 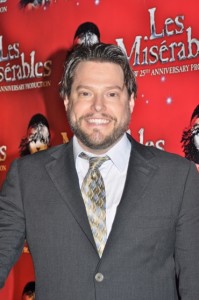 One caveat that must be mentioned is that the leads of the show are sometimes—I never could get a direct answer as to how often—unexplainably absent from it. The afternoon that I went to review, local cover Ron Sharpe was playing the role of Jean Valjean: the publicist was not told, in fact, the audience was not told, he was just there instead of announced lead Lawrence Clayton and only a two-inch piece of paper inserted into program books would have alerted only the most attentive audience members to that fact.

Sharpe is a wonderful performer who has performed at Marriott Theatre and on Broadway but the biggest problem he has now is in making his way to the high note of “Bring Him Home” with the same conviction and control as the rest of his range. And you could wonder why the producers would expect audiences to still fork out full prices for a lead that, in this case, could have been heard locally for a fraction of the cost.

The ambiguous answer that I got—and this took nearly a week to get—was that the Sunday that I attended that “the creative team needed to see Mr. Clayton’s understudy, Joe Tokarz, perform the role of Jean Valjean.” However, Joe Tokarz did not perform, Ron Sharpe performed. And while Clayton was reportedly back performing Tuesday evening, I was given an entire list of performances where Clayton would not be performing, though the reason was never specified.

It would be great to be able to compare the two leads, and at first, the show seemed initially concerned that we would be reviewing a cover and was quick to invite us back to review the lead. When the run began selling out and when Clayton’s performance schedule became too unpredictable to schedule a reliable return visit, however, that offer was ultimately reneged. (Dennis Polkow)