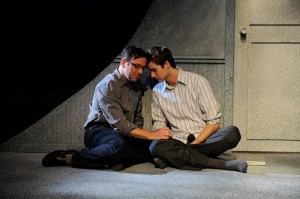 Chicago’s ability to thrive is enhanced by its water: our ability to consume and profit from it has kept us lubricated and lucrative since the city’s beginning. Water makes our progress as a metropolis, as families, as people, possible.

Noah (Stef Tovar) is a gay man negotiating life after the death of his spouse. His adopted daughter (Falashay Pearson) distances herself and longs for her missing father; his co-worker (Alex Hugh Brown) pressures him for a relationship he might not be ready for.

Caitlin Montanye Parrish’s script is a provocative mix of history, obstacle and longing that insists you root for all the characters. Tovar’s performance is solid and sympathetic as Noah tries to rebuild his life; Pearson makes her character’s abandonment palpable. But the highlight is Brown, whose crack timing and dry wit enable him to walk off with every scene.  His work is a cool drink. (Lisa Buscani)