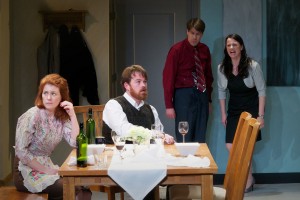 The duality gimmick wears after a while; the characters invade each other’s space and the staging can be confusing. But strong performances keep the story on track. Amyx nails both mean drunk and sanctimonious recovering alcoholic; it’s a challenge to make that downward slide plausible. Wellington and Wycoff modulate comfortably between smug condescension and breathless desperation. Molly Glynn shines as Noel’s decent wife who, like the other characters’ morals, isn’t around for long. (Lisa Buscani)