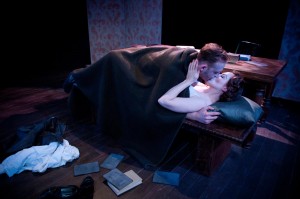 Partly based on the Faust legend, Mikhail Bulgakov’s twentieth-century Russian classic was meant as a satire of Stalin’s Russia and the censorship of artists by government. Much of that commentary remains in this adaptation. But by making the central character a playwright, instead of a novelist as in the original, this stage version reveals much about the inherent theatricality of storytelling as well.

The Master is a playwright struggling to perfect his new play about Pontius Pilate. While his mistress, Margarita, believes him to be a genius, he is constantly beset by his director and producers, literary critics and cultural commissars. Things only get worse, and more surreal, when Woland, a professor of black magic, blows into Moscow with his motley crew, commanding a supernatural control over these players.

While the show doesn’t really get moving until the Professor shows up, director Louis Contey and company produce so many beautiful moments that continually peel back the layers of the play’s onion structure, not only bringing the play to life but also presenting it to scrunity, just like the Professor’s magic tricks. The costume and scene designs are simple yet evocative, and the large cast includes standout turns from Dennis Grimes as the Master, Tom Hickey as Woland and Anderson Lawfer as a talking cat. Afterward you’ll wonder—was it just a sleight of hand, or black magic? (Neal Ryan Shaw)