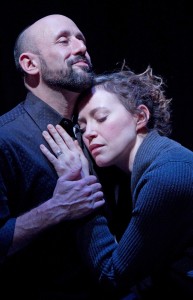 Recent widow Jane (Rebecca Spence) is set up by college friends Merrill (Lily Mojekwu), Tom (John Byrnes) and Alan (Mitchell Fain) with dream date Jean- Pierre (Steve Hadnagy). They’re anxious to see Jane move on. She does, but not in a direction anyone expects.

Melissa James Gibson’s script has its misses. Hadnagy’s character is badly drawn. He’s a hot, available goal; we never find out much more about him. Merrill and Tom’s marriage is tested but the conflict’s resolution is weak. Alan is the gay friend with no life outside his straight friends. Really?

That being said, Gibson’s genuine ear for dialogue and the ensemble’s sharp timing never let the story sink. Spence endows her character with believable grief; she’s a woman who won’t lionize a husband she misses desperately. We want Mojekwu and Byrnes to survive despite their characters’ bad behavior. Fain is the standout even without much to stand on. His technique is immaculate; his soul is obvious. (Lisa Buscani)