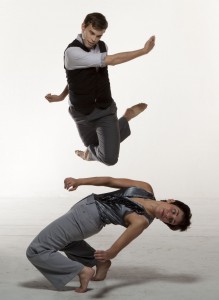 It’s a mixed repertory for SPDW at the Dance Center this weekend, including a world premiere by guest choreographer Carl Flink, artistic director of Black Label Movement, a Minneapolis-based company named not after Mr. Walker’s 12-year-old Scotch but, even more badass, generic brand food labels, a la Repo Man. Flink’s work looks hard at damage, from shipwrecks to wrecked hearts, oil spills to televised wars and his subject matter for SPDW is physical collision. “HIT” asks the audience to embrace collision as event; anyone who has been in a bicycle or vehicle accident knows there’s nothing like high impact to stop time and notice the minutia of the moment. Also on the program is Joanna Rosenthal’s noir-inspired intrigue “Grey Noise,” a finalist from last fall’s audience-judged dance competition The A.W.A.R.D. Show! and “To Have and To Hold” by Joanie Smith and Danial Shapiro. (Sharon Hoyer)

Sharon, I love that someone finally made The Repo Man connection to the company name other than one of my high school buddies! That’s taken more than 5 years. Indeed it is much more badass than Mr. Walker’s smooth brew . . .