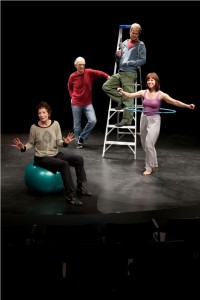 Dexter Bullard has been on a roll lately, delivering a number of productions, each of which, at least for this reviewer, has been somewhat obscure in its intentions until its final moments, in which the play seems to crack like a whip. His latest is Annie Baker’s 2010 Obie Award-winning play about the teacher and students of a small-town Adult Creative Drama class. A study in ensemble acting, the show depicts the growing together (for some) and growing apart (for others) of the members of a community drama program over the course of its six-week curriculum. Bullard elicits poignant, nuanced work from the entire cast, but some of the most illuminating work comes from Steve Key as Schultz, a recently separated carpenter, and Carmen Roman as the class’s embattled instructor Marty. Coming close to two hours in length, the production could have benefited from an intermission, although such an interruption might also have derailed its determined, slow build-up of quiet moments between lovers, strangers and friends. (Neal Ryan Shaw)