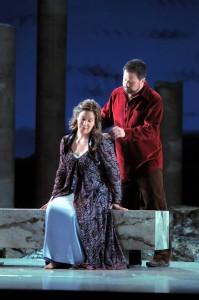 “War Follows You Home,” read the posters promoting Peter Sellars’ new production of Handel’s “Hercules” at Lyric Opera. Unlike his last production here—John Adams’ “Doctor Atomic,” where Sellars concocted his own libretto from nuclear formulae—Sellars has this time taken an existing work, an oratorio by Handel, and via extensive cuts and staging, cobbled a narrative that has tried to wrestle Handel’s work closer to its original source material, Sophocles’ “Women of Trachis,” that had been hopelessly optimized by Handel’s adapter. And yes, it works. Brilliantly, in fact.

What Sellars sees is that there is a profound parallel between the Sophocles telling of the post-labors Hercules’ homecoming into what has become an alien and uncontrollable world and the post-traumatic-stress syndrome of American troops returning from our own recent wars. The casualty in all of this, unfortunately, is much of Handel’s music, which has been gutted and restructured to conform to Sellars’ particular interpretation; entire choruses, arias, instrumental pieces, characters and subplots—even the glorious finale itself which portrays an apotheosis of Hercules into the arms of his father Jupiter—in short, anything that doesn’t fit Sellars’ directorial overlay, is simply disrespectfully discarded.

What Sellars has going for him is that few know “Hercules” well enough to notice; though written as an oratorio, the subject was Greek mythology rather than the biblical themes of most other Handel oratorios. Handel called it a “music drama”—nearly a century before Wagner—and structured it into three acts (here reorganized into two parts) with clear operatic overtones. It was performed without costumes and staging in Handel’s day and failed to find its audience, thus falling into neglect until the twentieth century rediscovered it. 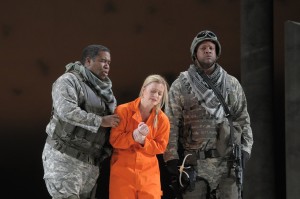 In this case, there are moments where Handel’s music and Sellars’ staging so line up in compelling ways that they pack a powerful punch, so much so that the two-hundred-some veterans who attended last week’s dress rehearsal and participated in panel discussions afterwards were able to recognize their own experiences. Sellars has used much interview material that he gathered from local veterans going back to World War II and right through Afghanistan, to inform his staging.

One of the most fascinating such moments is when Hercules makes his entrance with his captive Iole, who is wearing an orange jumpsuit and hood a la Abu Ghraib. Hands tied, Iole—who, ironically, is silent in Sophocles’ treatment—sings her aria about freedom while having absolutely none. The paradox makes this an extraordinary entrance, particularly because of British coloratura Lucy Crowe’s stunning bravura performance, pure vocal gold, the best of the production by far.

As Hercules’ wife, British mezzo-soprano Alice Coote may not have the same level of vocal flexibility, but she more than compensates with her extraordinary acting, particularly in her “mad” scene, a true forerunner of later such signature scenes in the genre. Countertenor David Daniels as Lichas—a role Handel wrote for a female mezzo—and tenor Richard Croft as Hyllus are terrific in what little they have to sing here after their roles were gutted.

Bass-baritone Eric Owens as Hercules is somewhat the odd man out, not only because the title character in this piece is rather ancillary to its proceedings, but also because he does not possess the vocal technique to sing Handel’s music with clarity. This was a throwback to the days of Jon Vickers or Marilyn Horne singing Handel at Lyric, i.e., push loudly and blur the individual notes with vibrato. Here, conductor Harry Bicket did not wait for Owens, he kept the tempos going at a brisk pace and Owens would eventually catch up on the other end. If you take the idea that Hercules is a broken man after his war experiences, then his vocal lines breaking down works dramatically as a metaphor for his world breaking down, but it is jarring since virtually every other singer on stage—even the Lyric Opera Chorus in its final Donald Nally-directed performances—is singing the music in the proper style and with a straight tone. Still, Owens’ death scene, which he sings upside down while his own rage is consuming him in red flames that are conveyed in the music and also in the red lighting, makes a powerful impact, more due to Owens’ acting than his singing.

With the role of the High Priest cut and Hercules left simply to return home in an American flag-draped coffin—never mind that his wife had jealously poisoned him and had asked Hyllus to cremate him on Mount Olympus—the ode to liberty chorus that optimistically ends the work despite its bleak ending here, does indeed pack quite a wallop. (Dennis Polkow)