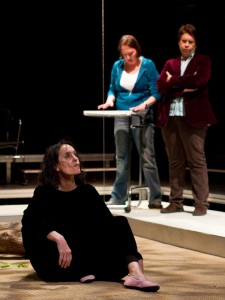 Rivendell’s new production at the DCA, from a new script by Madeleine George, examines whether, and how, language separates human beings from the rest of the animal kingdom. Brodie, a linguistics professor, is trying to have a child on her own but encounters a moral quandary when she discovers the fetus has a genetic defect. Her grad student/girlfriend wants more from their relationship, and a research subject’s daughter is giving her grief. Brodie’s only solace seems to come from the zoo’s “talking” ape.

George’s script is thoroughly intelligent, with themes that resonate deeply throughout the play as Brodie interacts with various other characters. As well-written as her script is, however, George seems to care little for offering any kind of bold opinions about her characters or definitive answers to their plights. The trajectory of the play is a very subtle one, mirrored in the stripped-down, in-the-round staging by director Julieanne Ehre and subdued performances by actresses Meighan Gerachis, Kathy Logelin and Marilyn Dodds Frank. There’s a certain less-is-more approach at work here, one that provides a compelling impetus but doesn’t really follow through on it. (Neal Ryan Shaw)