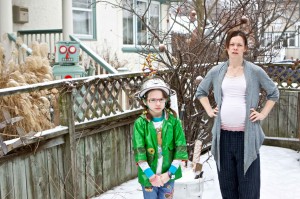 A depressed, pregnant housewife in Ypsilanti reads “Hedda Gabler” and cleans her Beretta; she’s later kidnapped by robots and forced to perform the play in an Ecuadorian robot forest before being rescued by her husband, her 10-year-old daughter Nugget, who’s doing a school report on Ibsen, and her small-arms-dealing brother-in-law. And that’s only part of the plot—the competing story pits Ibsen and his slatternly maid against Ibsen’s dominating wife and his oddly filthy, strung-out archrival Strindberg. The play, while thematically somewhat cohesive (women’s lib = robot revolution?), is disorganized and incoherent as a whole—but joyfully and contagiously so in Sideshow’s production. Elizabeth Meriwether’s “Heddatron” is an oddly paced, disorderedly plotted, “badly made play” (as, we learn from Nugget’s school report, “Hedda Gabler” is), and this show is as successful as one can imagine a staging of “Heddatron” to be, with exuberant performances, gorgeous technical theater and, yes, mesmerizing remote-controlled robots made for the performance that make the spectacle more important than the illogical, disjointed, occasionally completely garbled story. When the entire cast bursts into a delirious song-and-dance rendition of “Total Eclipse of the Heart,” it’s impossible not to be charmed. (Monica Westin)