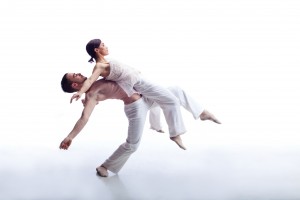 Fernando Hernando Magadan, from Spain, is a soft-spoken man of 30 or so. So soft-spoken in fact that the squeak of socks on the Marley flooring rang louder than his voice as he gave direction to the Luna Negra dancers working on “Naked Ape.” Magadan originally choreographed the piece for Nederlands Dans Theatre, staged in the round and performed in the airy City Hall of The Hague. Magadan said the open space inspired him to create the white, glowing sculptures, made from stiffened, free-standing shirts and pants lit from within, that will be scattered about the perimeter of the stage. Inside the clothes—which drape, rumple and crease as though on invisible mannequins—are light sensors that trigger sounds, allowing the dancers to manipulate the aural environment. With a good portion of the music provided by Bach and the visual impact of simply dressed dancers moving between luminescent, interactive, white clothing-sculptures, the scene feels classical, viewed through a postmodern lens.

Magadan is thinking about contrasts of stasis and motion, logic and instinct, artificiality and naturalness, technology and men. “The set is a way to represent an artificial environment around the dance itself,” he says. But artificiality isn’t ominous or oppressive in Magadan’s world; he delights in interaction between man and his inventions. This isn’t the first time he has incorporated interactive elements in his choreography either. “When I think about creating technology for the stage, it’s like Alice in Wonderland: you touch something and something happens. You don’t just put the dancer on the space because he has to be exposed, but because for him it’s an experience to be in that space, in this case filled with elements he can interact with in one way or another.”

But what about the dancing? Choreography too frequently suffers at the expense of multimedia curiosities. After seeing an excerpt from “Naked Ape” at a Luna Negra “antojito” preview a month after visiting rehearsal, I can say Magadan makes no such mistakes. Perhaps because of his comfort with exploring multimedia technologies he uses them effectively—that is to say, sparingly—leaving ample space for fierce dancing. The duet previewed was hungry, all encompassing, gorgeous and diamond-cut precise. Magadan is a poet. The other two lighthearted pieces bracket nicely: Luis Eduardo Sayago Alonso’s affable piece on the growth of relationships entitled “Solo una Vez” and Artistic Director Gustavo Ramirez Sansano’s silly, hilarious, high-energy cha cha ensemble number “Flabbergast.” (Sharon Hoyer)