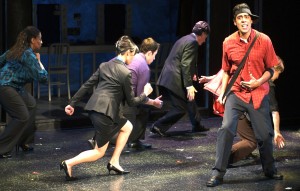 Governor Walker, eat your heart out. It’s hard to imagine a more timely and heartfelt Illinois response to the labor crisis in Wisconsin than a revival of the 1977 musical version of Louis “Studs” Terkel’s 1974 bestselling book “Working.” Using his ever-present tape recorder, Terkel interviewed a wide variety of workers about their attitudes concerning work and uncovered a wealth of information about the extraordinary thoughts of “ordinary” workers.

Several of the stories were turned into soliloquies with songs penned by Craig Carnelia, Micki Grant, James Taylor, Mary Rodgers, Susan Birkenhead and Stephen Schwartz that were given a 1970s pop-rock sensibility and were often discussing jobs that were cutting-edge for the time, but the references had become rusty and irrelevant. With new songs added by Lin-Manuel Miranda to update things a bit but more significantly, the show figured out two important ways to bridge the three-and-a-half decade time gap.

First, much as the 1982 televised “American Playhouse” production had done, have Terkel himself and his tape recorder (in this case four of them) frame the proceedings. Since Terkel passed away in 2008—and you could imagine him kicking himself that he missed this onstage opportunity—his voice and photos are used to recall his powerful persona, which does help ground this material in time and space.

Second, ingeniously remind the audience that everyone connected with the show from the techs to the actors are also—right in front of our eyes—“working,” right here, right now. That was truly a master stroke, and the usual behind-the-scenes stage business that audiences usually do not see are here actually highlighted. The set itself is a geometric configuration of dressing rooms where the cast is preparing to perform as the audience enters the theater. We hear the techs counting down the show’s opening, the lighting cues, et al. We see makeup and wardrobe folks walk out onstage and dress and make up the actors between scenes.

The message is clear: it’s not just the characters being represented who are workers, but every aspect of putting on a show about workers depends on workers as well. Most of their work is generally unseen, and in the case of a cast, we do not ordinarily think of them in “working” terms because when an actor succeeds—i.e., when he and she does their job well—it does not appear to be a job at all: the actor disappears into character. 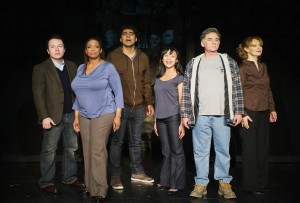 And what virtuoso performances these are, from top to bottom. Not only is every member of the diverse eight-member cast an effective singer who can bring off the songs—which are given more stylistic unity via filled-out arrangements that are re-energized, updated and performed by a fine live band—but the acting is no less impressive. Performances are structured in such a way that a single actor goes from one scene to another where we actually watch them be transformed via radical costume changes, switches of wigs, hairpieces and facial hair, and then see them emerge via extraordinary performing ability into another worker altogether.

The fact that these are local actors whose work most theater-goers will know and whose unique abilities are banners for “Chicago actor” is a wonderful local touch, especially with Terkel being a Chicago icon and the original workers that he interviewed being largely Chicagoans. When the cast is seen as themselves alongside the entire behind-the-scenes crew in the grand finale and after such extraordinary work and greeted, at least on opening night, with an instantaneous standing ovation, it is an extraordinarily powerful labor-affirming moment. Here’s hoping a Wisconsin tour will follow the run. (Dennis Polkow)