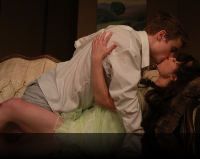 Joe Orton’s 1964 ode to innuendo is tame by today’s standards, written when men were not gay but “sensitive.” The piece works best as a time capsule of repression and misogyny, a reminder of how far we’ve come.

Rootless charmer Sloane (Aaron Kirby) arrives at Kath’s (Tracy Garrison) looking to rent a room. Her father (Gary Murphy) knows him but can’t place the face. Brother Ed (David Schaplowsky) initially wants him out, yet quickly hires him. The power dynamic shifts back and forth between the three.

Kirby nails the baby-faced seduction but needs work on the menace. Garrison captures her character’s simple-minded neediness; the competent Kirby is a bit too young to dodder. Schaplowsky has the unenviable task of portraying his character’s sexual duplicity; one can’t help but wonder that, if he wasn’t required to do that by his era’s social norms, this might have been a very different story. (Lisa Buscani)