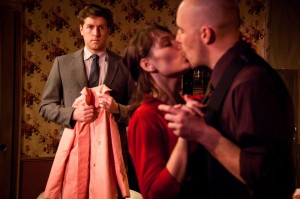 Teddy, a philosophy professor, returns to his childhood home to introduce his wife to his domineering father, timid uncle and two intimidating brothers. Rife with sexual tension and barely repressed violence, “The Homecoming” is by any standards a discomfiting piece of work, with its ambiguous dialogue and slowly creeping sense of unease. Recognizing the importance of pauses and gestures, director Geoff Button’s superb cast manages to capture not only the menace underlying the character’s interactions, but also the sometimes awkward dark comedy of Harold Pinter’s script. The result is a riveting two-hour production that feels much shorter, as the six actors relish each bit of malice they toss at each other within the walls of their threadbare living room. Combined with the set, the eerie lighting design makes the scene breaks as ominous as the story. More than forty years after winning the Tony Award for Best Play, “The Homecoming” still resonates. (Zach Freeman)