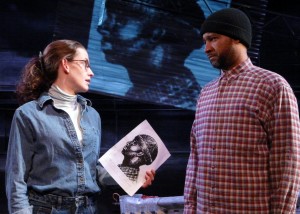 In 1994, after drowning her two young sons by pushing her car into a lake, Susan Smith reported that she had been carjacked by a black man who then drove off with her children, launching a nationwide manhunt and a public outpouring of sympathy for Smith. In “Brutal Imagination,” a play by Cornelius Eady based on a collection of his poetry with the same title, the event also triggers the birth of Mr. Zero—a black man created to “get things done.” Mixing facts, speculation and poetic extrapolation, Eady’s script finds Susan (Samantha Gleisten) and Mr. Zero (D’wayne Taylor) entwined in a dreamlike world, recounting together the events leading up to and following the murder of her children and the racial stereotypes that played into her claim and their acceptance. The otherworldliness of the presentation and the brevity of the show (under an hour) keep it from feeling emotionally manipulative, but those same two qualities leave it feeling a bit incomplete. (Zach Freeman)