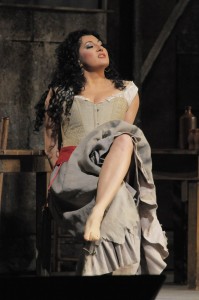 For those Lyric Opera subscribers who missed the October performances of “Carmen” and instead have tickets to the March performances, there is good news: this recast incarnation is a far stronger production.

The fall production had been planned around the Lyric debut of mezzo-soprano Kate Aldrich in the title role a mere five years after the company had last presented the popular warhorse, only to have Aldrich cancel due to complications from a pregnancy. Lyric’s solution was to cast the Carmen it had originally scheduled for a single matinee that Aldrich could not make—Iowa mezzo-soprano Katharine Goeldner—in all of the Carmens that Aldrich was originally scheduled to sing.

The result was a Carmen with a pleasing voice and stage presence, but a seductress in search of seductiveness, a low-energy temptless temptress. It is fascinating that Bulgarian mezzo-soprano Nadia Krasteva is neither more attractive—nor does she have a better voice—than Goeldner, but my, oh my, what a difference dramatically, which in this iconic role, counts for so much. This is a Carmen with swagger and attitude, a creature of wild and reckless freedom, which is not only what attracts Don José to her, but remains her lasting appeal to audiences.

Krasteva’s Carmen is able to be immensely flattering and charming one moment, and, as her signature “Habanera” warns, change her mind on a dime. Vocally, this is not a particularly French sound, nor a large or rich sound, though Krasteva’s melodic lines are focused and she has technique enough to bring off the vocal demands. But it is her vocal shading combined with her acting ability that make her a memorable Carmen. And often, it is those little touches, such as projecting Carmen’s ability to multitask during her getaway, making sure that with her hands restrained behind her back and checking to make sure that no one is looking, she pulls up her skirt with her teeth, mind you, to make sure that her legs are showing just enough when her captor comes back to her. Touches such as these make very clear who the real captive is here. 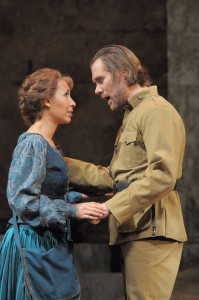 Likewise, tenor Brandon Jovanovich is a fine Don José vocally, but again, it is his acting as a truly tortured soul that is the standout here. Whenever the “mom” card is played, Jovanovich shows the deep conflict he is experiencing, and when Carmen wants him to go AWOL for her, hearing the military call reminds him of his duty and of the cost of treason. But perhaps most effectively—and actually experiencing it, it makes clear what a rarity this truly is these days—is that this is a Carmen and Don José who not only blend well vocally, but who generate sparks and romance that then become full-blooded passion in a most convincing way. Soprano Nicole Cabell brings wonderful artistry and filial piety to the role of Micaëla, the perfect completion of the triangle, though watch Krasteva’s Carmen reacting to this while Micaëla pours her heart out: it’s a hoot.

Even Kyle Ketelsen’s Escamillo, which was always well sung, has more confidence this time around, and the Lyric Opera Chorus is tighter and better focused. French conductor Alain Altinoglu, who brought much French color to the Lyric Opera Orchestra last fall, is able to keep tighter control over the rhythms and drive of the piece. All in all, the second time’s the charm. (Dennis Polkow)