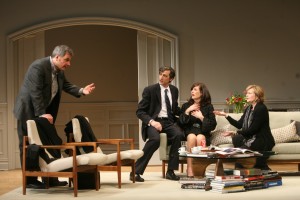 There isn’t much to say about Goodman’s production of Yasmina Reza’s Tony Award-winning new play, “God of Carnage,” other than it’s perfect. The play itself, from the creator of one of the most financially and critically successful shows of our time, “Art,” confirms that the French writer is a master of the contemporary upper-middle-class comedy of manners. Two couples meet to civilly discuss their children, one of whom smacked the other’s son in the mouth, knocking out teeth. A briskly hilarious seventy minutes later,  everything’s unwound, alliances have been broken and reassembled several times over and playground violence is the least of anyone’s problems. “Carnage” manages to carefully place layers of critique beneath the surface of crackling wit and raucous physical comedy, especially in sending up the four characters and the “types” they represent—an obnoxious corporate lawyer Alan (played as a lovable weasel by David Pasquesi), his Barbie of a wife Annette (Beth Lacke, a porcelain doll ready to crack and expel its innards), the self-made man of the world Michael (played with a masterful blend of sensitivity and gruffness by David Kupferer) who hides an ugly inner life for the sake of harmony in his marriage to the protagonist of the piece, Veronica the writer (played with just the right manic earnestness by Mary Beth Fisher), who may just be the most unhinged of all. From the opening lines, which show how the simple parsing of language can and does sow the seed of conflict, ideas about marriage swirl around big themes about man’s nature and civilization itself, all without ever adding any friction to drag on the work’s comic rhythm. (Theater-goers might also see shards of resonance with “Who’s Afraid of Virginia Woolf,” just recently at Steppenwolf.) Takeshi Kata’s set nails the trappings of enlightened bourgeois aspiration, and Rick Snyder’s crisp direction keeps the audience from wondering what’s so funny about such profound sadness until long after the curtain falls. (Brian Hieggelke)