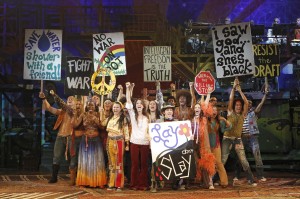 When I was in grade school, my parents saw “Hair” in Los Angeles. Their program book became my version of National Geographic, where I’d sneak occasional peeks at the “tribe” in their native state—that is, in the legendary nude scene that ends Act I. The cast album played so much in our home that it was a soundtrack of my second grade. So I was quite excited to finally see the show last week, since it’d made such a lasting impression.

A revolutionary production when it became the first rock musical on Broadway in 1968, it’s not hard to imagine the resonance “Hair” had in the same year as the assassinations of Martin Luther King and Robert F. Kennedy, as well as the infamous Democratic National Convention in Chicago. Not only was it upending the status quo of musical theater, but it held up a mirror to a generation waging an uprising, and was as much a communal happening as a traditional show presented by a cast to an audience.

This revival arrives with stellar credentials: like the original, it’s a production of The Public Theater, now with American Repertory Theater’s Diane Paulus at the helm and contemporary dance’s Karole Armitage handling the choreography. It won the 2009 Tony Award for Best Musical Revival. And it functions reasonably well as a period piece: you can see why it shocked the establishment in its time with overt pansexuality, celebration of drug use, anti-imperialist themes and freewheeling miscegenation.

“Hair” is more like a rock concert than a theatrical piece, with a very thin book centered around the journey of the character Claude, who came out of the borough of Queens to become one of the tribe’s leaders—the tribe being a band of anti-war hippies hanging out in the park—to a final soul-wrenching confrontation with the realities of the military draft. In what must have seemed a particularly clever twist at the time, the theatrical device of a dream ballet here becomes a bad drug trip, where Claude gets a taste of the killing to come when he ships to Vietnam, mixed in with Abe Lincoln, General Custer, John Wilkes Booth, Aretha Franklin (whose “Respect” was a fresh hit at the time) and several others. Chock full of songs that helped define the sixties—”Aquarius,” “Good Morning Starshine,” “Let the Sun Shine In,” as well as provocations like “Sodomy,” “Hashish” and “Black Boys”—the show brings the cast into the audience and then the audience onto the stage in what must have once been a refreshing democratization of the theater but now feels as authentic as holding up a lighter for an encore at a geezer rock concert. 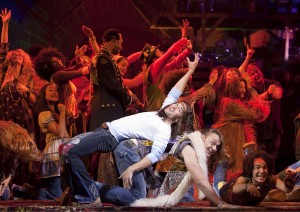 And that’s the problem I have with the show. It’s a perfectly fine representation of “Hair” in its day, but removed from the time in which it was first staged, you realize that, some great songs notwithstanding, it’s not that great a show. It’s all good in an “Up With People” kind of way, but we just don’t feel the danger that was certainly present at the time: the danger of getting killed in an immoral war, the danger of openly defying your government, the danger of sitting in a theater, caught up in a show breaking down taboos and really speaking to you and to those around you. (Though the ending finally delivers a taste of all this.) I have no big problems with the staging, choreography or ensemble, though nothing is particularly noteworthy, either. Most of the radical elements have long ago been co-opted into other shows, taking away their shock value. I suspect that audience reaction will be entirely colored by age—if you were around in the sixties, you’ll filter it through either a nostalgic sense for a special time or a disdain for a rather unpleasant era. If you’re too young to remember the sixties, “Hair” will have all the political impact of, say, “Mame,” which had its Broadway run around the same time.

This revival missed a great opportunity to connect literally or even spiritually to the wars of our time, or to the youth-led revolutions underway in Egypt and the Middle East (which, in fairness, kicked in long after the show opened). In stark contrast to the truly selfless and dangerous uprisings dominating today’s headlines, this Second American Revolution, as conveyed in “Hair,” was sidetracked by sex, drugs and various notions of self-actualization, ultimately leaving a pervasive sense of narcissism in its wake. It did succeed in one sense, in that it brought down perhaps one of the most liberal presidencies in American history, making way for Richard M. Nixon.

As for me, I missed the party but came of age during the hangover of the seventies. During my time, sixties culture was systematically stripped of its edgier elements and recast as some kind of feel-good fest. “Good Morning Starshine” was performed on Sesame Street during its debut season, with hippie Muppets in tow. In fact, the set here evoked that Children’s Television Workshop universe for me. Is it any wonder that my generation’s “rebellion” was led by Alex P. Keaton and Ronald Reagan?

I went looking for the magic of “Hair: The American Tribal Love-Rock Musical” and couldn’t find it. I guess you had to be there. (Brian Hieggelke)