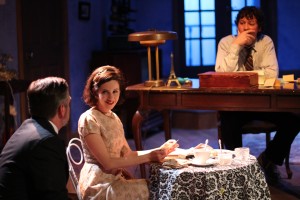 Questioning whether it’s still possible to find love in Paris, the protagonist of Mat Smart’s play finds he must redefine the thing itself. Vincent has traveled on a whim to his dead grandparents’ Paris apartment, armed with nothing but a new suit and a suitcase full of his grandfather’s love letters to his grandmother. It’s here that he somehow feels best positioned to discover whether he is truly in love with the girlfriend he left in Chicago.

Director Steve Wilson’s take on the play is unabashedly romantic, although those forced flights of romantic fancy bog down a play that already lacks much external conflict. The cast, led by Joel Ewing, is a charming bunch of anti-cynics. Krista Krauss and Max Lesser provide some relief in a claustrophobic environment, and Robert McLean, as the ghost of Vincent’s grandfather, infuses the show with just the kind of old French charisma Vincent is desperate to torpedo. (Neal Ryan Shaw)