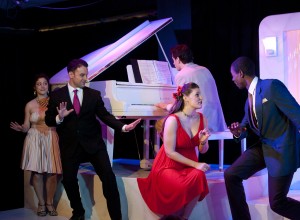 In addition to its musical theater productions, Theo Ubique has presented a number of revue shows over the years that have showcased the likes of Jacques Brel, Kurt Weill, Harold Arlen and Stephen Sondheim. The group has never performed a Rodgers and Hammerstein musical before, however, and has decided that its first foray into the crème de la crème of musical theater canons would be a revue of Rodgers and Hammerstein numbers.

Ordinarily, you might expect Theo Ubique to cobble together its own revue of R&H songs as it has with other composers, complete with anecdotes going into the context of a song within a specific show or details about how a particular song was composed. In this case, however, there was already a 1983 revue available and approved by the R&H estate that had been conceived by Jeffrey B. Moss, “Some Enchanted Evening: The Songs of Rodgers & Hammerstein.”

That revue—first done for a New York City hotel—featured two pianos and five performers and was actually somewhat of a “show-within-a-show” concept that had the performers prepare to go on as part of the show before singing solos, duets, trios and ensemble numbers with a decidedly New York cabaret-style feel that even included bits of jazz harmony and touches of swing and swagger, all done to syncopated two-piano accompaniment.

Most of those ideas are intact here, including a startling transformation of the No Exit Café into a vintage Manhattan supper club with white tablecloths, candlelight, chandeliers, a dressing-room area and a faux white-marble proscenium upon which sits, believe it or not, a shiny white grand piano. (If you know the intimacy of the space, it’s a wonder as to how such an instrument was moved in there.)

It is a single piano, however, and belongs to and is played by the show’s music director extraordinaire, 24-year-old Austin Cook, an Oklahoma City native who came to Chicago eighteen months ago after a stint working on shows for Disney theme parks. Cook has taken the two-piano score and rethought it in an immensely pianistic and streamlined manner that offers the perfect complement to the vocal performances, all of which are coached by Cook himself. Did I mention that the guy has a resemblance to Harry Connick Jr., though plays and sings so much better? It will be interesting to see how long this extraordinary talent stays in Chicago, for this guy could go anywhere he wants to, doing anything imaginable including arranging, performing, singing, coaching, any or all of the above, and across musical boundaries (his training is classical).

Cook actually directs the show, from the piano, as a prompter or a répétiteur would do in an opera house. He gives every cue, mouths every syllable, and sets tempos and moods with astonishing grace and ease, never rushing or overdoing things and—here is where Cook is worth his “wait” in gold—taking great care to be sure that no one else does, either. 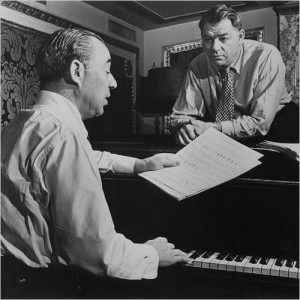 The results make even singers whose voices you know well sound like entirely new and polished instruments. Jeremy Trager, for instance, is a Theo Ubique veteran who regularly performs around town, but none of his past work—fine as it has been—will prepare you for what he does, for instance, with the monumental “Soliloquy” from “Carousel,” a show where only last summer Trager played the villain at Light Opera Works. Trager’s instrument has always been a fine one, but here he sculpted a virtual artsong with innumerable vocal colors and shadings and with more focused diction and vocal technique that emphasized diaphragm singing even scaling up and singing softly.

Dana Tretta, another Theo Ubique veteran, also astonishes with the new vocal colors and subtleties to be heard in her performances, but no less impressive are the newcomers, including Sara Schoch, who with her coloratura soprano, optimism and blonde good looks recalls Kelli O’Hara, and Evan Tyrone Martin, who not only has a gorgeous tenor voice but physically resembles a former Illinois senator who is now occupying the White House. But Danni Smith revealed the most diversity and deepest meanings from her numbers, whether in a swinging “The Gentleman is a Dope” from “Allegro” or within a poignant and tender ballad such as “Hello, Young Lovers” from “The King and I.”

Extraordinary performances aside, the production also reminds us what a gold standard, what a treasure trove the canon of Rodgers and Hammerstein is to the Great American Songbook. This show takes songs that we all know and love and, by transposing them to a different context, cobbles a remarkably perceptive portrait of the nature of relationships.

One example to make the point: “Maria” from “The Sound of Music” as heard in that show was a female voice ensemble number that was a series of complaints sung by Maria von Trapp’s convent superiors about her wild and erratic behavior. Here, however, it is heard as a male solo number—sung by Martin—that uses the same lyrics and melody to wryly comment on the confusing nature of the opposite sex. You are reminded that every R&H song is a world unto itself that can even work when placed in a different orbit, a further reminder of why this definitive American songwriting team manages to leave us thoroughly enchanted. (Dennis Polkow)