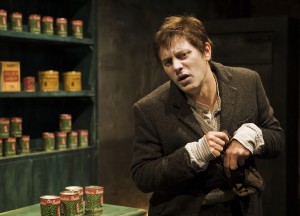 Responding to the accusation that his parents killed themselves out of the shame of having a disfigured child, the titular Cripple Billy says, “You don’t know what was in their heads.” This idea resonates through the entire play, in a brilliant and brooding staging by Garry Hynes for Druid Theatre Company. In Ireland in 1934, a Hollywood crew comes to the islands to shoot a film called “The Man of Aran.” On hearing news that the director wants to use locals as actors, Cripple Billy decides he finally has a chance to see the world. Many of the component themes of a McDonagh play are present: violence, manipulation, closely guarded secrets. The play is also wickedly funny, without any of the actors (all great) turning their characters into two-dimensional types. Sadly the production makes no use of Chicago Shakespeare’s thrust, which, at closer range, would have made the game of guessing character intentions much more painfully pleasurable. (Neal Ryan Shaw)