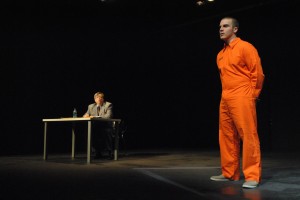 Based on actual correspondence between author Gore Vidal and bomber Timothy McVeigh while McVeigh awaited execution, Edmund White’s ruminative “Terre Haute” imagines a scenario where the two (unnecessarily renamed) men meet face to face to discuss everything from government conspiracies to sexuality to the fear of dying. In the tight performance space at The Athenaeum, which provides a properly cell-like feel to the show, effeminate writer James Brevoort (Danne W. Taylor) interviews the high-strung death-row inmate Harrison (Cole Simon) regarding his motivations behind his devastating act of terrorism. The two actors compensate for the show’s visual minimalism (two chairs and a desk) by creating three-dimensional characters; Taylor’s constant bewilderment regarding his evolving feelings towards Harrison (“Are all sociopaths so charming?” he asks) is particularly captivating. Though the conclusion of the show is a bit ambiguous (even Vidal’s real-life articles are more controversial), the path that leads to these conclusions is constantly engaging.  (Zach Freeman)