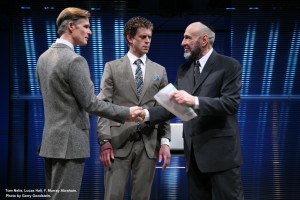 “The Merchant of Venice” is the most problematic work of the Shakespeare canon and remains the longest-running and most performed high-profile work of art that can still be routinely interpreted as anti-Semitic. One way that modern, especially post-Holocaust performances often deal with performing it is to make its Jewish character Shylock somehow more sympathetic as if to say, “See? The Bard didn’t really pen such a bad Jew after all.”

In a performance as stunning in its subtlety as in its chilling, bare-bones simplicity, F. Murray Abraham refreshingly makes no attempt whatsoever to make his Shylock even remotely likeable. That is a fascinating strategy flying against the standard approach that many contemporary actors have taken with this role that seek to portray Shylock as a good “everyman” who’s just been pushed over the edge.

By riding into the hatefulness and the weaknesses of the character head-on, we are reminded that indeed Shylock is an everyman, but an everyman whose flaws have to do with his own issues and inadequacies, not his religion. As longtime University of Chicago professor of history and religion Martin E. Marty once brilliantly put it to me, “If you start out SOB and end up Born Again, the end product is SOB-Born-Again.” That is Shylock in this version: a jerk in any religion, in any culture. Yes, there are the anti-Semitic remarks and actions of the characters surrounding Shylock which fuel his own insecurities, but here, these are merely aural wallpaper to a man so rotten to the core that he feels more at home in the world of hate and exclusion than he does love and inclusion. 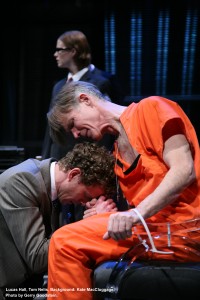 And, most cleverly, we see Shylock actually practice his religion in between his hatespeak: he offers prayers, diligently prepares for the Sabbath, is reverent about keeping his head covered and a prayer shawl under his business suit. The details of his religion, he sees; what he is missing is the overall meaning, the purpose of the details. You can’t help but be reminded of fundamentalist members of any and every religion who live in an odd spiritual bipolarity where they can hate out of one side of their mouth, yet offer a prayer out of another and yet see no relationship whatsoever of one to another.

Another striking aspect of this production—which originated at New York’s Theatre for a New Audience and is directed by former Old Globe artistic director Darko Tresnjak—is that it does remind you that this work is a comedy. A dark comedy, to be sure, but a comedy nonetheless. You do find yourself laughing, even if nervously at many points, at the absurdities of character’s reactions, and by extension, at ourselves as well. The fact that the setting has been contemporized so effectively helps in this, and there is not a faux British accent in the bunch. Yes, there are times when you wish there was more onstage chemistry between specific characters (the love scenes particularly) but if the point was to show how much one empty time can be like another, the production succeeds skillfully. (Dennis Polkow)