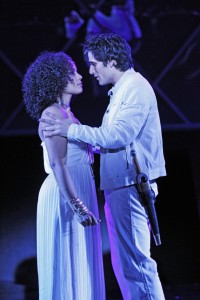 This is the second local production of Elton John’s “Aida” programmed in the wake of last year’s “Billy Elliot” mania—ironically, “Billy” did not even last long enough to be around for this déjà vu vu vu, if you count the fact that the original work gestated in Chicago over a decade ago.

“Aida” represents the third and final collaboration between Elton John and lyricist Tim Rice, all for animated Disney films: “The Lion King,” “The Road to El Dorado” and “Aida,” which was never made. Based on the Verdi opera as it was adapted for a children’s book by soprano Leontyne Price, the definitive “Aida” of her generation, an “Aida” concept album was recorded in 1998, much as Rice had done with his longtime collaborator Andrew Lloyd Webber for properties such as “Jesus Christ Superstar” and “Evita” before they became stage works.

When the animated version fell through, Disney Theatrical put together a mammoth stage adaptation with Goodman Theatre’s Robert Falls as director and one of three credited co-writers, always the signal of a troubled past. It was that version that previewed in Chicago with Heather Headley (Nala in the Broadway “Lion King”) and Adam Pascal (the original Roger in “Rent”) in late 1999 before hitting Broadway in March of 2000, though not before the elephantine scenery that had so many problems—even infamously injuring Headley and Pascal here in Chicago—was simplified before opening on the Great White Way.

That version won four Tony Awards, ran for four years and spawned a national tour that ran for another three years but, ironically, never came back to Chicago (Joliet was the closest it came). Meanwhile, “Aida” had gone on to have a life of its own in community theaters and high schools though had not had a professional production in Chicago since its pre-Broadway preview until it became the first musical last summer for the newly formed Bailiwick Chicago, which emerged out of the former Bailiwick Repertory Theater. 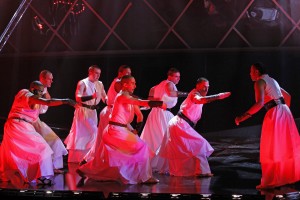 With the expanded production values that have become a signature of recent Drury Lane shows, the suburban venue now has its crack at “Aida” with a glossier but not nearly as cutting-edge production as Bailiwick gave us.

Director and choreographer Jim Corti has restored the convention of race being the subtext of the story by having Aida (Stephanie Umoh) be black and Radames (Jared Zirilli) be white, despite the historical reality that an Egyptian and a Nubian (or Ethiopian, as per the original) would both be Africans and dark-skinned. All Nubians are here cast as black, all Egyptians are cast as white, and this racial division is further underlined by Corti’s choreography attempting to be hip for the black Nubians, but square—verging on camp—for the white Egyptians.

There is also the attempt to replicate the idea of the impressive set of the original, at least insofar as the finale and its see-through tomb which here is a large pyramid which distractingly serves as a backdrop for the entire show.

And despite the fact that there are some good voices cast here, the musical direction is so weak that most of them are not shown to their best advantage, some consistently coming in under pitch on climactic high notes and others using head voices rather than projecting via their diaphragms. This is a superficial pop-rock score to begin with, but is particularly poorly served when the beat is dragging and the dominant accompanying musical texture remains sparse piano chords. (Dennis Polkow)