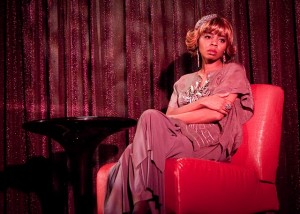 Jackie Taylor’s created a magical place up on Beacon Street with musicals that have the congregational energy and spiritual uplift of a religious revival meeting—without the religion. It would require a very dark soul to leave one of these shows in a bad mood. This latest work, written, produced and directed by Taylor, as so many Black Ensemble shows are, follows her successful formula of a fairly thin plot built around show-stopping songs backed by a rockin’ live band, in this case mostly the creations of Luther Vandross. “All In Love Is Fair” tells the story of six romantic couples (including a love triangle) in the fictional town of Love, Illinois. Rhonda Preston and Zachary Boyd are particularly compelling as the fiftieth-anniversary celebrants who start confronting mortality, and the supersized Vasily Deris brings the house down—and a tear to a few eyes, including mine—with his robust renditions of a couple of Vandross classics. Katrina Miller once again stands apart for her comic poise as Katie, the busybody narrator. In many ways, the experience is like an intimate concert; your level of enjoyment is predicated on your passion for the slow jams that make up its offerings.

At the press opening, the front row was populated with a group who went crazy over the songs, hands in the air, singing along and conveying a pure joy that we rarely see in the theater. Sure, the shows can be a tad shaggy, with mics cracking at times, and storylines a bit thin, but there’s no avoiding the “Power of Love” unleashed in this intimate space. (Brian Hieggelke)