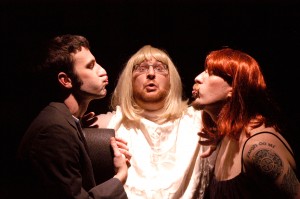 With dashes of the Reduced Shakespeare Company and high-concept improv, the premise of “The Literati” is deceptively simple: to take some twenty-odd literary classics, boil them each down to about fifteen-minute adaptations, and let the audience randomly choose five of them by rolling a giant die (“The Device,” as the cast calls it). Never fear, however, as knowledge of these classics isn’t a requirement. The writer/performers—Nick Freed, Derek Jarvis and “Koncept”—manage to come up with a formula that allows for the maximum number of jokes with a minimum of effort. Sprinting from the first line of the book to the last, though, there’s often little time for anything but broad humor and slapstick, much of it centered around the cast’s own misunderstanding of the work at hand. But in a fast-paced, high-energy comedy like this, there’s often little time to do anything but laugh, either. It’s the kind of show where “Balzac!” is exclaimed as an expletive. (Neal Ryan Shaw)