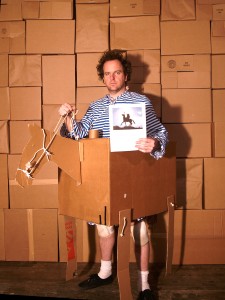 Collaborative performance duo Cupola Bobber, comprised of Stephen Fiehn and Tyler Myers, will be relocating from Chicago to New York this spring—but not before they put on “The Field, The Mantel,” possibly their most rigorously intellectual full-length performance piece to date, in their intimate studio space in Humboldt Park.

In addition to live and durational video performances, Fiehn and Myers have published collaborative writing, often as companion pieces to their shows—and this engagement of text shows in each one of the performances, which often work in thematically embodied essays, diligently researched and richly nuanced. Their last performance in Chicago, “Way Out West, the Sea Whispered Me,” commissioned by PS122 in NYC, Links Hall in Chicago and the National Performance Network, combined ruminations about the sea with provocative historical vignettes. Cupola Bobber spent this year touring the piece internationally before returning home to Chicago to work on “The Field, The Mantel.”

What makes their work so compelling are the additional elements of Cupola Bobber’s homemade, minimal visual aesthetic and their charmingly inelegant, often hamhanded choreographed movements. This combination of the physically gawky and the elegance of their theoretical and philosophical explorations results in an absurdity that’s both very funny and profoundly humane.

“The Field, The Mantel” showcases these characteristics, but it’s also somehow both their most historically rich work and the most restrained, despite spectacular visuals and extended humorous threads. Thematically centered around the institutions of archives and public libraries—the kernel for the piece is Flaubert’s unfinished novel “Bouvard et Pécuchet”—”The Field, The Mantel” approaches our individual and collective relationships to information and history through iconic figures, speeches and stories from American history. Fiehn explains that the piece “began with reading… into the archive. We started with the notion of a massive collection of information, known and unknown, and the feeling of standing before the infinite, how it dwarfs the human body.” 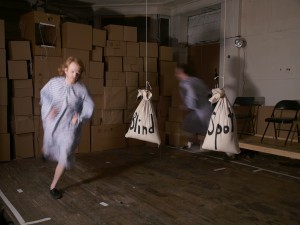 Without giving away too much, the piece achieves a critical stance by using Buffalo Bill as the archetypal imposter narrator. Myers, who grew up with a statue of Buffalo Bill across from his elementary school in Wyoming, became interested in the creativity of Buffalo Bill as a figure who wrote himself into so much history of the frontier: “Why was he so successful? Why were we so hungry for it at the time?” Myers ponders. More generally, what do we do with history and how do we relate to it? One of the driving questions of the piece is to what ends we study universal history—along with how we understand progress and envision a future for America now.

I am also wary of calling the piece overly political, because activist work this is not, but “The Field, The Mantel,” also engages a darker side of the way we process information and history. For Myers, it was never a question that “we had to make a performance about the archive that wasn’t totally ethereal. Archives are always institutions, and it would be remiss to work with the national archive and gloss over its political side.” Fiehn agrees, pointing out that the piece is also simply more closely related to the “kinds of conversations we’re having now in the United States.”

And yet Cupola Bobber do not lecture; they consider how to recast our nation through a passionate engagement with storytelling and humor—and through play with dozens and dozens of cardboard boxes, some with delicate shadow boxes, that make up spaces constantly being torn down and reconstructed as the story of history changes. Buffalo Bill, wearing the cardboard costume of a horse, explains his hilariously narcissistic version of history and argues about progress; speeches from the late 1960s play on tape recorders as Fiehn and Myers exhaust themselves keeping up with self-imposed choreography and pratfalls. It’s not only visually stunning and funny, it’s also a profoundly intimate experience—holding only a few chairs at a time, their studio (another charged site of meaning-making) is a place where you can’t avoid confrontation with the piece.

At Cupola Bobber Studio, 1359 North Maplewood, March 31-April 16, $12, cupolabobber.com. Includes an accompanying durational video work in which, for hundreds of hours, Myers and Fiehn read Library of Congress subject headings in a forest.