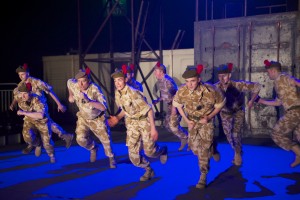 While the mise-en-scene of the play is mostly clutter-free, the alley stage of the Broadway Armory space framed by scaffolding structures, there is one scenic piece that ends up serving a number of resonant functions: it’s a pool table. Simple as it sounds, with its representations of casual gaming, army truck and even womb, the set piece ultimately says a lot about the hometown pride that is characteristic of the Scottish Black Watch. A Highland regiment with hundreds of years of history, it became the center of a controversy during the 2003 Iraq War when the U.S. Army requested that the Black Watch replace its own forces in an area known as the “Triangle of Death.”

Based on interviews with former members of the Black Watch, Gregory Burke’s script retains a certain docudrama spine. Yet between the scenes of jocularity, whether in the pool hall back home or in the thick of it during the war, there is a definite stylistic approach to the material that heightens the inherent drama of battle. Scenes of testosterone vulgarity make way to beautiful ballets with rifle-clutching soldiers or the singing of a swelling Scottish ballad. With the recent dissolution of the Black Watch into the Royal Regiment of Scotland, these stylized elements contribute to its crucially romanticized collective memory. In all, the play is an unadulterated insight into the life of a soldier, a provocative examination of the smaller consequences of foreign policy and a stirring tribute to a centuries-long tradition of pride. (Neal Ryan Shaw)

The National Theatre of Scotland and Chicago Shakespeare Theater at the Broadway Armory, 5917 North Broadway, (312)595-5600. Through April 10.