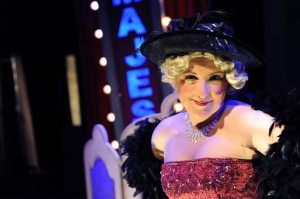 Mae West was a pioneer, writing and producing her own work and pushing the sexual content envelope with an impact that still stands today. Claudia Shear’s smart script captures West’s influence then and now.

The piece shifts between the blonde goddess’ bio and a love story.  Jo (Anne Sheridan Smith) and Charlie (David Tibble) bond over their West obsession; common ground develops into attraction, which is complicated by secret desires.

Smith has the right amount of zaftig sass for the role; size zero ingénues won’t do here. Tibble is gentle and bookish in his primary role; his conflicts are plausible. Nicholas Bailey deftly fills in the narrative with numerous characters from West’s past. The ensemble’s versatile, but performances are a little tentative, as if the actors hadn’t settled into the show quite yet. Steve Genovese’s staging seems flat and is hampered by numerous costume changes. Time will tell. (Lisa Buscani)