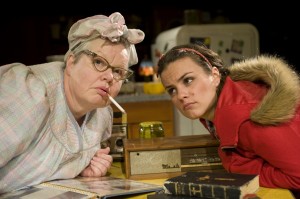 A high-energy cast and innovative staging take the forefront in the latest offering from The House Theatre. In small-town Illinois, 19-year-old Shelley (Briana De Giulio) spends her days waiting tables in a diner and her nights with her foster grandmother (Mary Redmon) playing board games, gossiping and listening to the police scanner. When the police report a young girl gone missing, a series of events finds Shelley rushing out of the house (intimately set in-the-round in the downstairs lobby), onto her bicycle, and into an entirely new set. The second act, which takes place in an elaborately immersive setting that spills out into the audience with a DJ and a smoke machine, consists of a number of disconnected vignettes, each of which is engaging on its own (thanks to the consistently impressive cast) but which overall lacks a sense of linear and emotional cohesion. At the end of playwright Joe Meno’s winding story the audience has been through a lot, but the upshot is muddled. (Zach Freeman)