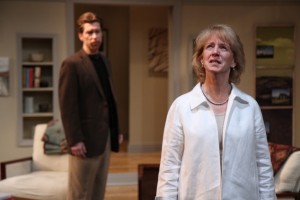 Pick an Edward Albee play (a later one, say) and there’s bound to be at least one of the following: WASP-y, middle-aged elites, grudgeful bickering over ageless tiffs, steadily emptying bottles of booze. Over the years the playwright has fiendishly showcased a, to put it nicely, determined disregard for the silver-spoon set. Yet with this one, while many of these ingredients are present—except for, conspicuously, the booze—they end up in service toward one of his most irefully absurd attacks on the upper class.

A successful architect and newly fifty years old, Martin is a loving husband to Stevie and loving father to Billy to boot. Until his best friend, Ross, outs him as a goat lover. Naturally over the course of one night his whole world upends. The folks at Remy Bumppo have an erudite, funny, passionate show here, although it’s difficult to tell whether they simply gave the script a confident once-over or whether they still need to settle into it. It’s remarkable how everyone keeps their hold of their vocabularies and sense of irony even as the horror wears on. Nick Sandys’ Martin is a tormented cad, though he inconceivably retains the actor’s British accent. Annabel Armour is a roaring lioness as Stevie. If they only meant it a little more, the barbs might hurt better. (Neal Ryan Shaw)