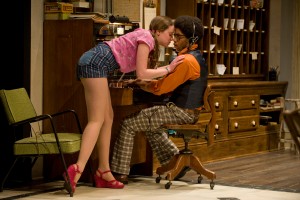 I’ve found it hard to avoid the fact that the timing of Steppenwolf’s production of “The Hot L Baltimore” is utterly bittersweet, with the death of its playwright Lanford Wilson arriving on the commencement of the show’s previews. But in a way, I suppose it can’t be helped. With the play’s themes of loss and the hauntings of the past in the present day, one sees the ghostly silent yet ever-present figure of The Man pacing the breadth and depth of the Hotel Baltimore and inevitably regards him as Wilson himself.

Regrettable as it is, though, the show is a perfect tribute from the company who owes so much to Wilson, Steppenwolf’s 1980 production of his “Balm in Gilead” having rocketed the ensemble into theatrical stardom when it transferred to Off-Broadway to become an instant sensation. And that show has much in common with this one, each featuring a sympathetic cast of misfits who stumble under the weight of their hardships and haunting pasts while clawing toward a seemingly unreachable future. Likewise, there is a blatant poetry to both plays, more subdued in Wilson’s later work, a lyrical theatricality that bursts the seams of American Realism. It’s that lyricism that director Tina Landau fully exploits in this production, and to a glorious advantage.

Written in 1973, the play takes place, resonantly enough, on Memorial Day, the same day the staff and boarders of the Hotel Baltimore receive notice that the formerly beautiful residence, now a flophouse, is being torn down in the name of urban development. That fact is utterly Greek in its tragic inevitability, and it provides the be-all, end-all of the play’s plot. Wilson had always preferred the sculpting of fully rounded characters anyway, and in this large cast, there’s hardly a character you don’t see at least two sides to. Even those whom you might peg early on as villains, such as the conniving street urchin Jackie, receive their due diligence from Wilson’s loving hand. 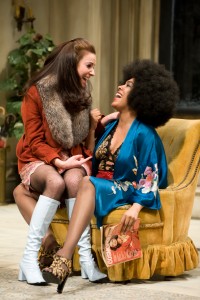 So this is where the exemplary ensemble work of Steppenwolf and Lanford Wilson are a perfect match. You’d think that a play with as threadbare a plot as this one wouldn’t hold your interest for very long, but the acting, exceedingly competent at its worst but thrilling at its best, delivers on its promise of some stirring emotional turns. For me, it didn’t get much better than Molly Regan as Millie, the Baltimore’s sweet, de facto matriarch, Alana Arenas as the aforementioned Jackie and de’Adre Aziza as April, a prostitute who, being in many ways the living embodiment of a once-classy flophouse, understands her own irony better than anyone else.

The utter sympathy can get cloying at times, but somehow Landau manages to rein it all in. Insofar as it’s a modern melodrama, she creates a rhythm to the show that balances introspection, intrigue and hijinks. There’s a crystal chandelier that hovers over the stage, sometimes on, sometimes off, depending on the beat, and Suzy, one of the other prostitutes, stands under it at one point pouring a Dixie cup of farewell champagne. “We may be a flophouse, but we know class,” she proclaims. Not for long, sadly, except for perhaps in memory. (Neal Ryan Shaw)