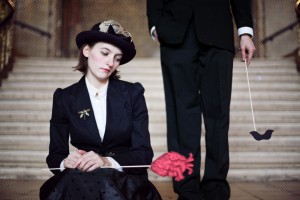 Emily Schwartz’s sharp new take on a hundred-year-old mystery surrounding a homeopathic doctor who murdered his music-hall-performing wife riffs on the public/private theme of this year’s Garage Rep series at Steppenwolf by splitting her titular character into three people—the public ego, private romantic and fantasy-driven versions of Doctor Crippen—who create a schizophrenic chorus navigating the crime and bring up some fairly provocative questions about agency and identity along the way. But while the play is energetically acted (Matt Holzfeind steals the show as the id-driven fantasy face of Dr. C, along with Kate Nawrocki as his gold-digging adulterous shrew of a wife) with stylized movements impeccably choreographed by director Jimmy McDermott, any substantive themes get lost in the stylized, campy spectacle of the production that loses the real psychological conflicts of the play. The biggest problem is that the motivations of and relationships between the three versions of Doctor Crippen as the show is directed are very fuzzy, and when that gets lost, the only interesting tension of the play disappears, leaving the fairly hackneyed crime-of-passion/cat-and-mouse plot in its place. With the exception of Elizabeth Bagby’s distinctive atmospheric musical direction, the art direction is simply not that interesting—in a vaudeville/music-hall style, the set and costumes are pure Tim Burton lite, and the impressively timed frenetic movements don’t add up to any real action. What we’re left with are caricatures and recycled macabre comedy. That said, the show is whimsical, even joyful, and beautifully produced, and absolutely a fun time—pure Halloween candy. (Monica Westin)