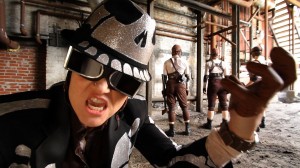 Adolescence is a time of rapid, often confusing and, for some, painful change—identities come into question, rebellions flare, bones quite literally ache. Atalee Judy finds herself experiencing such restlessness as her company, formerly known as Breakbone Dance Co, enters its teenage years. “The change of the name is very symbolic of the change in people’s lives and my own desire not to be categorized or pegged,” she says. “I have an aversion to stagnation and being seen as one thing. That’s probably from the punk scene: messing around with different identities.”

Judy, a lifelong punk, is the creator of bodyslam technique: a strength-intensive, gravity-embracing movement approach forged from the kinesis of mosh pits, dojos and dance studios. Breakbone Dance Co was the name synonymous with the technique; audiences could expect a Breakbone show to be aggressive and political—a fist raised in defiance rather than an evening of refined aesthetics or cerebral abstraction. When Judy announced she was changing the company name to BONEdanse, there was more to the moniker than a new label on the same product. “It was a personal change and a company change. It’s not that I won’t do bodyslam anymore, I’m just tired of making my company do it all the time. I was getting the sense that they weren’t into it and I decided that was okay; I honed the company down to collaborators. I’m allowing a lot more elements into the work—before I would have set tunnel vision about what I would want to see on stage and wouldn’t allow for happy accidents. Now I’m opening it up to ‘let’s let this dance piece make itself.’”

The first results of the collaboration will be seen in the Dance Shelter concert this weekend. BONEdanse performs a new piece about personal damage and backfired attempts at self-improvement, sharing the bill with fellow Chicago Moving Company Artists In Residence Ayako Kato and Rachel Bunting. Links Hall founder Bob Eisen, in town from Russia, is also on the program, as are composers Barry Bennett and Stone. It’s a real bang-for-your-buck kind of program: lots of bodies rotating through the stage, lots of new work, some of it progress, most likely a touch messy in places. It’s the kind of programming Judy cites as a change for good in the Chicago dance scene. “Grants are harder to get for less-established companies,” she says. “Artists are banding together to put together shows. I’m seeing more fringier festivals happening, offering opportunities for artists to have their work seen without putting on a show of their own. Not a high-gloss standard, and that’s what excites me.” (Sharon Hoyer)

Thank you to Sharon Hoyer for her interest in the arts! She continually covers small and large events and offers different angles, viewpoints and perspectives on changes within the scene. We are very grateful to have you New City – thank you for all that you do!