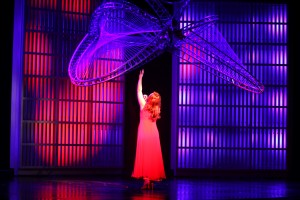 Combining all of the art forms as it does in a live setting,  opera is the ultimate human creation. A cursory look at the history of the genre reveals that, at its best, opera remains a step ahead of culture whether in the form of the cutting-edge eighteenth-century operas of Mozart, or the nineteenth-century “music dramas” of Wagner, which even managed to foresee much of what became twentieth-century cinema. Despite some notable exceptions, however, it was more common for opera productions to be more adventurous than the operas themselves during the twentieth century, largely a century of re-imagining new ways to stage old works.

Contemporary examples of opera where one or two elements are innovative are not uncommon, but new operas where every possible element pushes the envelope and which nonetheless manage to become much more than the sum of its parts are ultra rare. Tod Machover’s “Death and the Powers,” which is receiving its Midwest premiere by Chicago Opera Theater after premiering in Monaco last September and after having its American premiere last month in Boston, is such a work.

Visually, this is an opera that owes much to the vocabulary of the most sophisticated art-rock arena shows, and I was explicitly reminded of the most innovative examples that I have experienced in that genre, particularly Emerson, Lake & Palmer’s “Brain Salad Surgery” tour of 1973 designed by HR Giger and U2’s “Zoo TV” tour of 1992 designed by Brian Eno. Decades later, I can still vividly remember the design and images those tours generated.

Likewise, though it has only been two days since experiencing “Death and the Powers,” images experienced here (designed by Alex McDowell) would be hard to imagine not remaining with me for every bit as long. 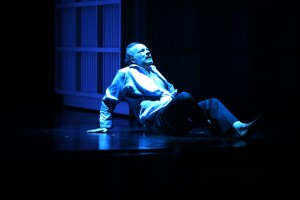 But it isn’t just that the design of “Death,” wonderful though it may be, is a feast for the eyes, which it most certainly is—particularly for anyone with a psychedelic sensibility or fondness for 1960s color organs and metallic sci-fi gadgetry—but it is how much the visual design and the music complement each other so perfectly as an overall sensory-overload experience.

The music, too, is of an extraordinarily high quality that in no way dumbs itself down to pander to a wider audience as so much “new” music attempts to do these days. Machover, who composed three operas before this work, has clearly perfected his craft. There are arias and ensembles here that are delightfully operatic in all of the best ways, including having strong melodic lines, and yet, when Machover wants to be jagged, angular and avant-garde, he pulls that off in an authentic attempt to mine genuinely new electronic sounds, not pop-driven, gimmick-filled ambience for its own sake. And it is hard not to be struck by the amazing use of sound throughout the theater generated, we are told, by no less than 143 speakers that really does engulf you at times, in much the same way that Boulez’ “Repons” does. (Hardly a surprise, since Machover used to work at IRCAM.)

There has been so much written about the extraordinary level of technology needed to produce this opera that it can be distracting, but you quickly settle in and forget all of the footnotes and details, and simply sit back and enjoy what is truly a one-of-a-kind extraordinary ninety-minute ride.

So many folks behind the scenes make this work happen, but a particular standout is baritone James Maddalena, who originated the role of Nixon in John Adams’ “Nixon in China,” which he recently reprised at the Met. Here, Maddalena is Simon Powers, the dying billionaire who seeks immortality by programming himself into various media in such a convincing way that he remains a vocal and visual “presence” long after his physical body has expired. Extraordinarily, we see Maddalena only briefly onstage early on, and he then retreats to a soundproof booth in the orchestral pit where his voice and actions are morphed throughout the work in astonishing ways.

No less impressive is how precisely conductor Gil Rose holds all of this together with the remarkable new music group that gave the American premiere last month, the Boston Modern Orchestra Project.

Kudos to Brian Dickie for providing Chicago with the most engaging contemporary opera experienced here in years, perhaps decades. For every attempt, for better or worse, that COT has made at coming up with “opera less ordinary” as the company trademark likes to claim, on this one, the company really hit the ball out of the park. (Dennis Polkow)