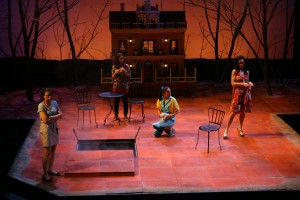 The United States’ long-troubled relationship with its southern border state tends to paint much of our perception of Mexico in simple black-and-white tones. Tanya Saracho’s reworking of Chekhov’s “The Cherry Orchard” as “El Nogalar” (The Pecan Orchard) crafts a more complex and colorful picture of a nation not only in a constant struggle to come to terms with its neighbor to the north, for sure, but also with its own troubled past and present. A clever idea, this, taking such a familiar work, so European in its themes of class and family, and setting it in Latin America where European colonizers long ago exported their notions of landed gentry, class discrimination and violent conquest.

The matriarch, Maité (played with vivacious abandon by Charín Alvarez), has returned from a self-imposed exile, along with her Americanized younger daughter Anita (energetically played by Christina Nieves), to her family’s ancestral home in northern Mexico, where her older daughter Valeria (earnestly played by Sandra Delgado) wages a losing battle to hold on in the face of an evaporating fortune and, more ominously, the violent threats of the Mexican “mafia.” Saracho’s innovations here,  in a crackling and funny script augmented by the creative direction of Cecilie D. Keenan, include a clever way of blending English, Spanish, Spanglish and Espanglés that in itself hints at the complexity of modern Mexican life. And Brian Sidney Bembridge’s set, an exquisite dollhouse in an orchard, establishes the unreal fantasy of the family’s notion of its place in the world before a word is spoken.

In interviews, Saracho, a Mexican citizen from the more prosperous end of her country’s economic spectrum now living in Chicago, has described her personal connection to Chekhov’s story by saying “those are my aunts in Mexico.” But her sympathies here clearly lie in the struggles of their servants, the upbeat and fearless housekeeper Dunia (played with charisma by Yuneun Pardo),  and especially the indigenous López ( the vigorous Carlo Lorenzo Garcia), who  packs a pistol and has found prosperity after leaving their employ by arriving at ambigious relationship with the mafia, but never loses his soul. (Brian Hieggelke)