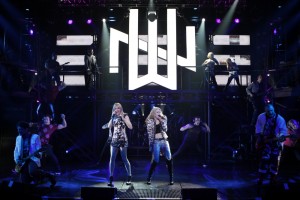 In 2003, twin sisters Lynx and Lamb Gaede formed a pop group, recording the ballads and anthems of the white power movement. Their crude warbling received major coverage; they espoused their ideology on “Good Morning America.” “White Noise” is the thinly veiled dramatization of the Gaedes’ story that explores media manipulation with uneven results.

Matte O’Brien’s book is dark and sharply funny, but the show’s “Broadway big” numbers and voices bog it down as it builds to a cliché climax. “White Noise” is loud and super-slick but that’s the point: It shows us how effective hate with six layers of shellac can be. (Lisa Buscani)