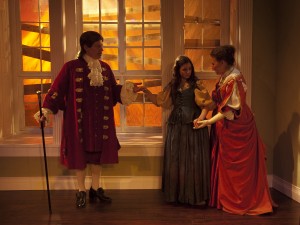 If you didn’t already know that playwright Naomi Wallace is from Kentucky, you might assume the writer of this play set in seventeenth-century London during the plague is a natural-born Englishwoman. Not that it matters too much; well-researched historical dramas about experiences far-removed from a writer’s own are hardly a new thing. Yet beyond the gory details of highly stratified English life, maintained even during the plague, there’s a sense that the nobles, beggars and thieves in “One Flea Spare” could exist in any time or place, for that matter, here and now.

Independently of each other, Bunce, a sailor, and Morse, a young girl, seek shelter from the plague in the home of the Snelgraves, just days before they had expected to be able to reopen their doors. Only Kabe, a guard, declares they’ll have to stay shut in another twenty-eight days. Now all four are stuck with each other.

Eclipse’s revival of the play uses the Greenhouse’s studio space remarkably well, encouraging feelings of claustrophobia. Brian Parry and Susan Monts-Bologna are terrific as the Snelgraves, a bitter couple whose marriage went sour too early. J.P. Pierson’s Bunce has a sensitivity and romantic streak you wouldn’t expect of a sailor, and Elizabeth Stenholt owns the stage as street-smart Morse. Zach Bloomfield as Kabe, a shameless profiteer, compels laughter via discomfort. Anish Jethmalani’s direction is, as the Donne poem goes, “cruel and sudden.” (Neal Ryan Shaw)