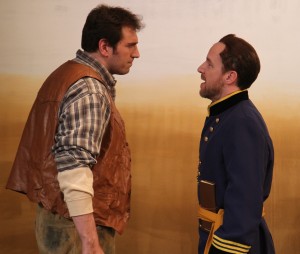 Mark Pracht and Thad Anzur in "The Copperhead."/Photo by Johnny Knight

City Lit (citylit.org) just announced the launch of a five-year sesquicentennial project, and it looks to be epic. They’re producing five shows to remember the Civil War, one each year. Four “haven’t been written yet,” says artistic director Terry McCabe, since they’re world-premiere commissions. This month’s production of Augustus Thomas’ “The Copperhead,” directed by Kathy Scambiatterra, will open the annual April series. It’s a forgotten play that tells the story of an Illinois man and his Southern sympathies during the Civil War. “Opus 1861,” next year’s installment to be directed and devised by Elizabeth Margolius and McCabe, is set in present-day Afghanistan and focuses on soldiers who find strength in songs from the Civil War period. The third installment, Maureen Gallagher’s “Comrades Mine: Emma Edmonds of the Union Army,” will tell the story of the only woman in U.S. history to receive an Army pension for military service when disguised as a man. Kristine Thatcher’s “Fugitive Slave” is installment four, and wrapping things up in year five will be “Confederates in the Attic,” McCabe’s adaptation of Tony Horwitz’s book. (Lauren Kelly-Jones)