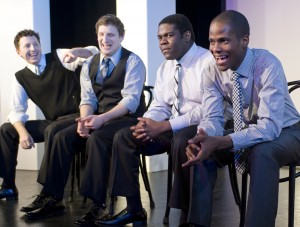 “God works in mischievous ways” seems to be the subtext of an ambitious attempt to take the sketch-comedy-revue format beyond its traditional contours in the ninety-ninth mainstage show at the Second City. This ensemble, along with director Billy Bungeroth, has created a through line in the sketches, something about the inevitability of fate and the intertwined blend of heaven and dreams, of divinity and subconscious. While the ambition is compelling, the outcome is a few too many flat, over-long sketches with messages that border on maudlin, like the mother who counsels her son on bullying or the bit where a dead man reunites in heaven with a dead son. And short bits riffing on Jay Cutler and Brett Favre seem especially disconnected from the larger premise, not to mention out of season. More effective is the sense of fractured chaos rendered by “God,” i.e. the control booth, in seemingly random bursts of explosive sounds, “technical difficulties” and spotlights that intentionally miss their mark. It’s unsettling in an intriguing way, a sensation underlined in a few strong sketches that seem as much performance art as comedy. In one, a typical Second City premise—a swooning couple enters a horse-drawn carriage—devolves into a sadistic display of man-versus-animal brutality with a bizarre ending that tweaks the idea of fate’s inevitability. A sketch exploring the contemporary place of privacy in our culture, inspired by the TSA’s new full-body x-rays, is as fascinatingly disturbing as it is funny. 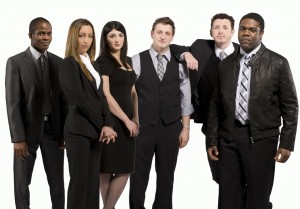 Performances are steady, with a handful of standouts. Katie Rich’s seemingly disengaged punk-rock teen is a highlight and Tim Robinson has a sort of psychotic nebbish presence that never grows tiring, but it’s Edgar Blackmon who might be this cast’s breakout star, with a crackling energy in every sketch he’s in.

Chicago’s north-south rivalry is as old as baseball, but the best sketch of the night, where the Cubs are either the “n*ggers of baseball”—an idea floated by the black characters—or not the “n-word of baseball”—the white characters—shows that old saws can be sharpened with inspired writing and vigorous performance. Less effective, though vexing in an interesting way, is the dream about Obama that bookends the show. It’s emblematic of both what’s right and what’s wrong here: loose, shaggy and often murky in its message, but admirable and intriguing for its aspiration. It manages to keep  hope alive. (Brian Hieggelke)