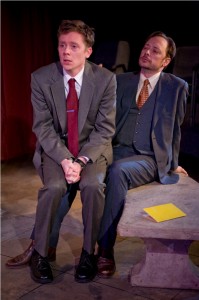 The manic Callimaco (Steve Haggard) wishes nothing more than to share a bed with the alluring wife of the wealthy but witless Messer Nichia (Doug Vickers). Luckily he’s purchased the services of the mischievous Ligurgio (Lance Baker) to help him meet his goal. “Watch carefully, for you will not get another explanation,” the delightfully devious Ligurgio commands the audience before taking center stage in the series of underhanded dealings captured in Peter Constantine’s clever translation of Niccolo Machiavelli’s sixteenth-century satire “The Mandrake.” Director Steve Scott has a scene-stealing cast, and the lack of props and austerity of the set speaks to his (warranted) reliance on them to sell the story. Early on, Ligurgio, in his role as narrator, offers a glass of wine to any audience member who professes to be unamused by the comedically elaborate plotting; that glass will likely go undrunk for the show’s entire run. (Zach Freeman)