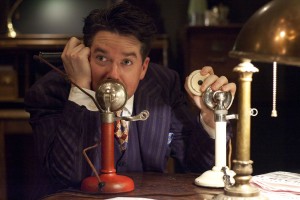 In the first act of “The Front Page, ” one of the fast-talking newspapermen condemns his own kind as “a cross between a bootlegger and a whore.” The depiction of reporters as salty, drunken rascals is a huge indicator of how unfamiliar the golden age of  newspapers can be to today’s audiences. With the iPad, blogs and Twitter overtaking print journalism, the typical reporter is, well, anyone with internet access. Playwrights Ben Hecht and Charles MacArthur wrote the play at a time when the editor’s controversial voice was the reason you picked it up, and TimeLine sells its own production on the strength of its personalities too.

Artistic Director PJ Powers plays Hildy Johnson, ace reporter for a leading Chicago paper whose resignation happens to coincide with the contentious, scheduled hanging of a man convicted of murdering a black policeman. But when things go wrong, they go really wrong, and it’s a testament to the bottomless energy of the huge Powers-led cast that the freight-train plot never loses momentum or derails. Collette Pollard’s set immerses the audience in a close replica of a 1920s Chicago press room, Lindsey Pate’s costumes pop, and Nick Bowling’s direction makes short work of two-and-a-half hours’ worth of gallows humor. (Neal Ryan Shaw)