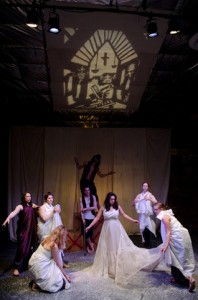 Chelsea Marcantel’s exciting but somewhat muddled script moves Bertolt Brecht’s story, in “The Caucasian Chalk Circle,” of a poor girl who steals a baby from the Soviet Union at the end of World War II to New Orleans during Hurricane Katrina. Ironically, despite the title and the setting, as cast by The State Theatre of Chicago this adaptation has more Caucasians than voodoo. That’s not to say the cast doesn’t sell the story. As the show’s narrator, the effusive Josh Hambrock does the heavy lifting for the plot, driving the show forward and keeping things lively. The striking set, consisting of more boxes than a mailroom and a few metal structures, works well with the open space and the imaginative costume design to create an eerily dreamlike atmosphere. A Sound Choir provides an almost supernatural score, complete with rhythm and sound effects. But it’s the imaginative puppetry and projection that give this show its heart. (Zach Freeman)