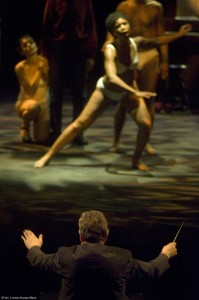 Teatro de Ciertos Habitantes makes challenging multidisciplinary theater, with long-running seasons that sell out in Mexico City. They have also increasingly become an intensive touring company known for characteristic rigorous research and self-aware discovery. Past shows in Chicago include “The Grey Automobile” at the 2003 Latino Theater Festival, which marked their Chicago debut, and “Monsters and Prodigies: The History of the Castrati,” their debut at MCA Stage in 2005.

This month they return in arguably their most exciting theatrical piece to date, in collaboration with the Chicago experimental music ensemble MAVerick. That’s because “El Gallo (the rooster): Opera for Actors,” which premiered at Festival de Mexico en el Centro Historico in March 2009 and was performed for a long season in Mexico City before its current tour, is a piece about the rehearsal period of a music piece for a concert. Co-created with British composer Paul Barker, the theater company merges the forms of theater and contemporary music through scenes of rehearsal, where the process is the core of the story—oh, and it’s sung entirely in a made-up language.

Founding director Claudio Valdés Kuri explains: “What you actually see is the rehearsal period of the piece for a concert, with an audition, the third rehearsal, the middle period of the rehearsal, the last rehearsal and then the performance. In this way, the audience shares the process.” Why a made-up language? “Well, in touring in the past, we would have to translate for each show, so our actors would have to learn to speak in fifteen languages. With this piece, we used an invented language, but it’s not meaningless—the language has significado, meaning…. The audience will have enough information to enjoy the scenes, and each one will have to make his or her translation.”

Why make a piece about rehearsal, and how realistic is it? “The volume is higher here, because what we are showing is two parallel realities: the common reality of the rehearsal and the imagination of the actors, so that you see the things that they could think of doing, or are doing inside… I could see at moments in the rehearsal that they could kill each other, that if they could shout and run away they would. So I put things they don’t do to show you more of a different kind of truth.” (Monica Westin)