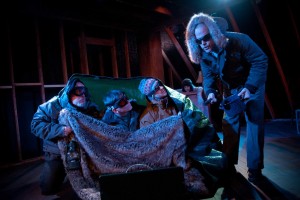 It’s the power of imagination pitted against the crushing mundane in Strawdog’s latest; German playwright Manfred Karge’s hyper-poetic script examines the quest to find the extraordinary among the ordinary.

The ensemble’s up to the tough language, no easy feat. Vann’s robust enthusiasm keeps his colleagues going; Hickey’s flight of fancy as his character is drawn further into the fantasy is particularly affecting. Jennifer Avery is a compelling presence as Braukmann’s bottom-lining wife, who has her own ways of creating something to live for. Kimberly Senior’s direction doesn’t highlight the initial desperation that sets up the final implosion, but the storytelling is still effective. It’s a gripping escape attempt. (Lisa Buscani)