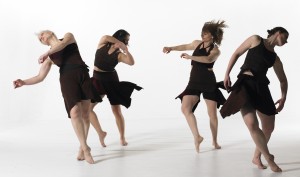 In a white light-filled space, Shirley Mordine leans against the mirrored wall and watches her ensemble rehearse for “Next 2011,” their annual spring festival. It’s nice to see that even after forty-two years of directing Mordine and Co Dance Theater—the longest-running contemporary dance company in the Midwest—the founder still grins when the movement ends. “Good, damn,” Mordine laughs. “It’s cooking!”

The six-person ensemble moves around the white floor in silence, but “music” is provided by an orchestra of squeaks, exhales and passion, and above it all is Mordine’s encouraging voice. “You’re going to fall into space and he’s going to catch you,” she says to two dancers above the heavy creaking and the sweat. You can tell she knows, and has forever known, what she’s doing. But this director is no dictator.

In a pause between movements while rehearsing “LifeSpeak,” the brand-new piece that will debut at Friday night’s opening, Mordine walks into the space and stands among the dancers. “What do you think?” she asks, “That was good, what do you think?” This directing style is essential to Mordine and Co. “I interact and collaborate with the performing artists, so that I really try to involve them in the information and the performance itself,” explains Mordine. “I just love the idea of evolving work in a workshop process with the creative participation of the participants.” She is a director who shapes, encourages and pushes her ensemble—but they have a freedom to create, and they move together as only the most creatively intertwined groups of humans move. From the outside, you notice that there is this mesmerizing momentum that seems at once unique to each dancer and collective to the ensemble (who are “more mature in terms of age and experiences” says Mordine) as a whole.

“Next 2011” will also include “Illuminations,” a non-narrative piece from the company repertory, which is inspired by the tale of Icarus, and all seven of the company’s dancers will perform, instead of the six in “LifeSpeak.” “A Mysterious Disappearance of the Second Youngest Sister,” by guest artists Lucy Vurusic Riner and Michael Estanich of RE|Dance, will also be showcased, along with a new and original work by Alitra Cartman, the recipient of the Mordine and Co. 2011 Emerging Artist Mentoring Program Award, who is an up-and-coming choreographer. But “LifeSpeak,” Mordine’s newest original work, is the most anticipated. 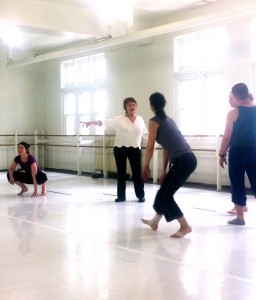 At one point in the rehearsal, a blonde dancer with a noteworthy tattoo on her back, Atalee Judy (who’s not only a Mordine ensemble member but an accomplished choreographer as the founder of BONEdanse), lays the costumes for “LifeSpeak” on the studio floor and asks for opinions—the dancers try them on and decide what to alter, where to add fabric, what to change. The attitude-accessorized pedestrian costume is shown around the room to both kind critique and praise—“It’s great when you have a dancer designing costumes,” says Mordine, and they all nod, testing the flexibility of the materials with their bodies, voicing their concerns, being heard.

Indeed, voice is key to Mordine. “LifeSpeak” is focused around storytelling through dance, by telling tales (both of our individual and collective pasts) that have evolved through a kinetic, abstract process. These will be complemented by live original music performed by Shawn Decker. “I think for some time I’ve been curious about voice,” Mordine says, “whether it’s an insurgency or an undercover voice, whatever it is, eventually we’re talking about human beings wanting to count for something. I think that’s what stories do.” There is also a sense, just like when the volatile nature of late-1960s and early-1970s Chicago encouraged her dancing in that period, that she is reacting to the current political climate. “I do look probably more to the world than just Chicago, and one of the things that I am looking at right now is what’s happening in the Middle East,” explains Mordine, “and my god do people want their voices heard.”