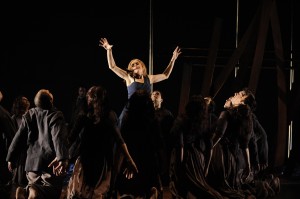 A Chicago premiere, more than three centuries after a work was first performed? Welcome to Charpentier’s “Médée, ” that seventeenth-century chestnut that as a byproduct of the court of Louis XIV fell into neglect until being rediscovered by the modern early music movement of the 1980s and nineties. It had been a long-stated desire of retiring Chicago Opera Theater general director Brian Dickie to present the Chicago premiere of this work—often considered the crown jewel of French Baroque opera—and this he did at long last, over Easter weekend.

This is the second of COT’s “Medea” trilogy that began with last year’s production of Cavalli’s “Giasone” (“Jason”) and which will conclude with next year’s production of Handel’s “Teseo” (“Theseus”). The carryover for all three productions is the sturdy presence of Baroque Band—the Chicago-based period-instrument ensemble that British violinist Garry Clarke founded here in 2007—and Scottish conductor and early music specialist Christian Curnyn who, as he did with “Giasone,” did a stunning job with his harpsichord continuo playing as well as keeping the action moving ahead in a spirited manner.

The decision was made to even revive seventeenth-century French tuning, which was A equals 392—a full step below today’s standard tuning of A equals 440—and a move that necessitated elaborate retuning between each of the opera’s five acts. COT learned from its early music experience last season and reconfigured the placing of the orchestra so that its delicate textures and timbres could be better heard, but in the cavernous Harris Theater, much was still lost. 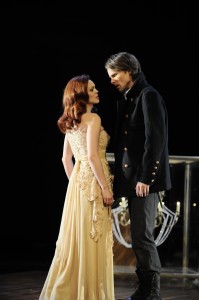 With all of the care and concern given over to the authenticity of the orchestral component, it is bewildering that none of the singers brought in are of a truly early music variety or pedigree. British mezzo soprano Anna Stephany certainly has the look and dramatic acumen to make a convincing Medea, but her vocal sameness and constant quiver make for an unconvincing aesthetic for this music. Canadian tenor Colin Ainsworth’s Jason came closer, but much of the cast and even the chorus were unable to consistently achieve the straight tone needed to most effectively bring off Charpentier’s vocal lines.

The sets, modern dress costumes and static staging are all bare-bones, to be sure, and often at odds with the constant dynamic motion of the music, which is the real star of this production even if it is heavily edited, including the loss of the entire prologue. Still, missing this production could mean a wait of another three-plus centuries to catch this work again, so bask in what glories of the French Baroque that you can, while you can. (Dennis Polkow)