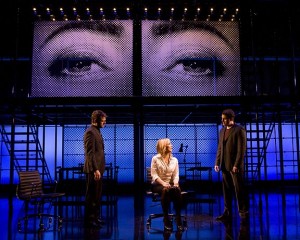 “People who think they’re happy just haven’t thought about it enough.” This line, spoken by Alice Ripley’s character Diana to her psychiatrist in one of many doctor-patient scenes in this feel-not-so-good musical, conveys the complex emotional truths at work in this Tony and Pulitzer-winning show. “Next to Normal” chronicles the struggles of Diana and her family with her chronic mental illness as they stand by her and fight to live a “normal” life. It’s a sophisticated work, with a running subtext about our culture’s reliance on pharmaceuticals to “solve” our problems—not just our actual illnesses, but also the everyday strife of living in the modern world—by keeping ourselves in a medicated, drone-like state. (We used to rely on television for that!) At the same time, it tells truths about family far more universal than those usually conveyed in either the gothic dysfunction or saccharine optimism that predominate the stages these days. Here, the parents function not only as mother and father but also as lovers and companions; their kids have their own struggles playing out in a life completely distinct and separate from the life of the family. But of course no one escapes from home.

Chicago is being treated to a production as close to Broadway as we might get, with a spectacular set (that recalls the set of “Working”), made up of stacked compartmental rooms that hold not only family secrets, but also the band—really more like two bands, with the music’s blend of rock ‘n’ roll and more classically structured show tunes. And at the center of the show we have Ripley, who starred on Broadway and won a Tony Award for her performance. 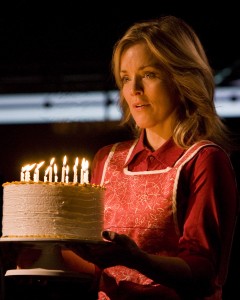 Ripley certainly is Diana; her ability to inhabit the spirit of this damaged woman is remarkable, but her singing voice is unusual, to say the least. Deep and husky at times, with very strange, almost foreign-sounding phrasings, her voice was so vexing on opening night that I went to the internet after the show to watch her on YouTube and see if there was any mention of her being sick or something. Apparently her voice is a matter of ongoing controversy, both at the end of her Broadway run and on tour. In fact, none of the voices on stage here struck me as noteworthy “show voices”—thoughs Asa Somers as the father Dan and Curt Hansen as the son Gabe certainly held their own with some powerful numbers—but this is not necessarily a big-voice show relying on show-stopping tunes.These “real” voices carry authenticity if not always a tune. The music recalls Sondheim at times, with complicated overlapping melodies and lines like “What doesn’t kill me/Doesn’t kill me” that manage to convey the existential struggle while subtly sending up conventional linguistic expectations—no one’s getting stronger on this stage.

Though the battle with mental illness is the plot here, it’s not the story. This is a tale of family, about the ties that bind and that rend. About why we stay even when we suffer. Toward the end of the show, the man sitting next to me was sobbing uncontrollably. Not tears of joy, but of pain; I suspect those few of us with dry eyes were crying inside. In spite of the show’s attempt to end on a sunny note, there is no relief from this unrelenting dread that haunts us, as we just soldier on. I just kept thinking of Beckett’s line: “You must go on, I can’t go on, I’ll go on.” (Brian Hieggelke)