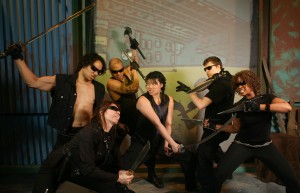 Theater companies that promise to deliver on both the immediacy of live theater and the accessibility and gloss of multimedia often run into the problem of incongruous blends of traditionally constructed scripts with bits of video shoehorned in. Not so with InFusion’s current production, not the least because “Soul Samurai” scribe Qui Nguyen’s own New York-based company, Vampire Cowboys, has a similar bent toward electronically infused live entertainment.

This tale of a girl samurai navigating a post-apocalyptic future Brooklyn overrun by warring gangs and plagued by a nonfunctioning mass-transit system feels, looks and sounds like a video game, comic book, exploitation film and Tarantino ripoff all rolled into one. The relentlessness of the show can grow laborious, simply because the highs are really high and the lows really low. Christine Lin as the girl samurai Dewdrop and the rest of the cast barrel through the show breathlessly and with abandon, inviting geeks of all stripes to ride the sugar high along with them. Yet afterward, all you’ve really got to show for it is a tummy ache. (Neal Ryan Shaw)